With the invention of the blue light emitting diode, Professor AMANO Hiroshi was awarded the Nobel Prize for physics in 2014. The fact that a new noble prize winner came from Nagoya University attracts a lot of attention from all over the world.

We were able to hear a wide variety of stories about not only his research, but also the classes he teaches and his life during his student years.

Q    In your student years, was the Blue Light-Emitting-Diode your first research interest? 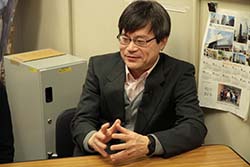 Actually, it was during my student years that computers were gradually being made and popularized among the general society.

Thus, I initially wanted to work with computers, especially the CPUs which are its core. But unfortunately, there weren’t any laboratories that did research on CPU design then, so in fact, I chose to study Blue LED materials as they were both in the same study of semiconductors.

Q    In your student years, in what way did you think that Light-Emitting-Diode would help society?

In the social trend of computerization then, one of the biggest problems they had was the display. In those days, computer displays were so big that it was impossible to carry them around like we do nowadays. The original purpose of LED development was to make displays smaller, thinner and high-tech. Nowadays, displays on smart-phones and cellphones use LED as well, as I expected. However, I did not expect for it to be as extensively developed so that it would become lighting equipment.

Q    Do you have times when you realize and are impressed at how your research has produced such practical usefulness in everyday life?

I was impressed and moved… In the beginning I was. LED was first utilized in traffic lights. This allowed many people to actually see them, and I was moved. But, I do get used to it after a while, and recently, I see many people looking at their smart-phones while walking, which rather makes me think "it' s very dangerous."

Q    What do you remember most from your research life as a student?

The biggest impression was... Back then, I used to discuss my research with young research members till very late into the night. I remember, continuously challenging and bouncing opinions off them about my research.

Research is fun, but there are also worries 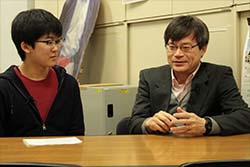 For me, it was fun to pursue my research because I knew that Blue LED can become a big impact in helping the computerized world. However, there was also the pressure and anxiety to not be beaten by others in the same race. So, doing research itself could be said to be fun, but you must produce results as fast as possible. I still feel like a child with homework on summer vacation, who hasn' t even started on the last day!

Q    In doing your research, did you ever lose confidence or feel like giving up?

Everyday was like that, the continuous repetition of it in fact. In a day, I could do 3 to 4 experiments, and when I couldn' t get a nice crystal, I would go home disheartened. But, by the next morning, I would feel re-energized and think of doing something different to do in the experiment. It was the repetition of this.

Q    How is the atmosphere of your current laboratory?

In my current lab, I am now in the position of a professor, so I do not have much opportunity to have discussions with my students till late at night. I believe that younger research members and post-docs should fulfill this role. In terms of the atmosphere... The topics that we cover now have become more important compared to when I was a student, which makes the expectations much higher. There is a lot of pressure, but I really think that the students are doing brilliantly. The vibe is very cheerful and everyone is in their full stride.

Comparing now and then

Q    Have your impressions towards classes changed from when you were a student to now as a professor? 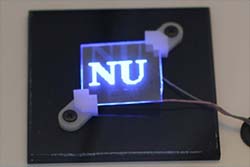 When I was a student... I liked to study and took various lectures. Each lecture had its own characteristic depending on the professors and they were all very interesting, allowing me to learn a lot. Now that I am in the position of teaching, things have become very standardized compared to then. Back then, there was no PowerPoint, so we used blackboards and printed materials. These days, most of the classes are done with PowerPoint. Becoming very standardized is a good thing, but to be honest, I am not sure if the true message I want to convey is clearly being passed to the students sometimes.

Q    Do you have something that you keep in mind or maintain as a key element in your classes?

It is of course, a class at Nagoya University, so I try to focus on very high level contents. I always try to carefully explain the logic like "Even if it is an extremely hard problem it can be solved by thinking this way." I especially focus on logical composition. That is, when I was a student, I loved math the most. Mathematics is the key to logic so "making a solid logical composition is of utmost importance when thinking about anything" is one of my beliefs and I try to be aware of that when I teach.

Q    Is mathematics very important to you?

In fact, I almost only studied Math. Mathematics was a very important subject for me.

Q    Have you spent most of your time at Nagoya University ever since you enrolled here as a student?

When I was an assistant professor, I was at Meijo University where I stayed for 18 years. It is my 5th year since coming back to Nagoya University.

Q    Is there anything different from your school days to now that you are a professor at Nagoya University?

First, the things that changed most were the campus and its buildings. I lived in a place called the haunted house, so the buildings have become much nicer. That is the biggest impression for me. As for the students, I don't think they've changed much compared to that time. Perhaps, the characters of students themselves do not change so much.

Q    Which building was called the "haunted house" ?

I think it was the engineering department building 1. I used to go there and use the equipment in the basement, and it was a very scary building at night.

Why did you choose Nagoya University?

Q    What was your reason for choosing Nagoya University?

I am not sure if I can say this on Nagoya University' s video, but during my high school years I wanted to go to a different university.

What is now called the "center exam" was called the "common first-stage exam" in my time, and it was a multiple choice test of 4 or 5 answer choices for each question. I got tricked very easily, and when I narrowed it down to two choices, I always got confused. It was very difficult for me. So because of that, I came to Nagoya University.

I was very bad.

Q    Do you have any recommendations for things that students should do while at university? 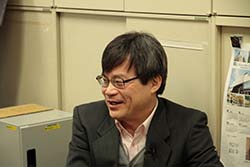 Of course, studying is a priority. In my case, I started studying harder in high school when I fell in love with mathematics. However, I did not know why I had to study, or the significance of studying. My outlook broadened when I came to university, and during that time I was truly fascinated by the world of computerization. This motivated me to study harder. It may seem quite obvious, but I think studying well is the most important thing.

Q    Did you have any passions outside of academics?

I played softball in my first and second year of university. When I was in elementary school, I used to love playing softball and soccer, but I didn' t have the chance to do it during my junior high and high school years. So, I got back to it in university.

Q    Do you think playing sports is also very important?

Of course I like studying, but I also like sports. Concentrating on the sport allowed me to refresh my mind and was very good.

Q    Please give us a message to our current students.

I think that all students of Nagoya University are very bright and have many talents. I see so many talented students coming to my laboratory. However, it is not always the case that everyone focus on their studies and research with the passion to make a difference to help other people. I hope that students can find such goals while they are in university. And for those who have found their goals, I hope they strive in achieving their dreams. 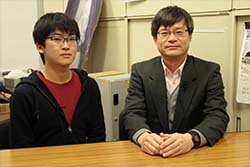